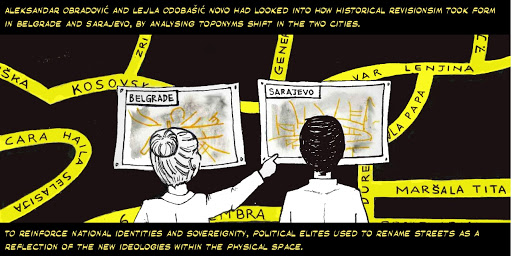 In collaboration with Hostwriter, we have asked the Tandem Western Balkans participants to share their stories. In this story, Daniela De Lorenzo reports on Lejla Odobašić Novo’s and Aleksandar Obradović’s collaboration.

Imagine waking up one morning and finding out you live in a new street. Not really a new one, rather, the name of your street is not the one you used to call it anymore – and the reason beyond that change is way bigger than one can think.

In ancient time, within the Roman law, damnatio memoriae, was the practice to punish someone by erasing them from history so that no trace or proof of their existence could ever be found. Emperors will issue orders to disfigure the faces of statues, drawing lines on the names engraved on books and monuments. Figures close to the elites or simply repudiated wives without guilt would be the most common victims of oblivion. Emperors would decide on the turn of history to their liking, distorting the past and deciding over who and what had the right to be remembered.

Revisionism, the practice of selective erasing and re-modelling history has not stopped with the Roman empire. Many political elites have looked back to find successful ways to install new ideologies, by including similar practices in their political actions. This is a tangible feature and outcome of the ex-Yugoslav conflict, which took place exactly 30 years ago.

LOOKING IN THE STREETS

The breakup of the Socialist Federal Republic of Yugoslavia brought to a split of six republics, where the new dominant political elites took in their hands these new entities, now autonomous from each other. Having reached full independence through a long dramatic series of conflicts within the region, there came the need to rebuild national identities by erasing the common Yugoslav past.

A revisionist strategy was developed through active political intentions, to shape new national narratives where political ownership was not just proposed in discourses, but also throughout the urban space. A selective reconstruction of countries’ history took place starting with even the smaller form, such as street signage.

Aleksandar Obradović, Director and Researcher at Philopolitics from Serbia and Lejla Odobašić Novo, assistant Professor at the Bosnian International Burch University have researched such process and phenomena in their home cities, Belgrade and Sarajevo.

The Tandem Western Balkan project Remaking History: Tracing Politics in Urban Space had looked at whether revisionism took place in the public space and in which extent and direction. To do so they used street names as pointers to prove their hypothesis, mapping the shift of toponyms: “In many ways, the ruling of the streets reflects a certain political ideology: the research examines it in a very concrete way, through whether street names have been changed or not.” said Odobašić Novo. As well, the intention was to define the ways in which the same tools were used in creating and defining new national identities in both cities.

“We did this project to understand what happened to us in the last 30 years, and to see how those things that happened to us, are different, and in what way. So that was really a research of how we became what we are now,” continued Odobašić Novo.

Enacting a de-commemoration process, and so deleting places of memory, deemed to create oblivion of historical figures, events and common history: “We focused on analysing the moves of the elites, and their strategy for deciding to change or to preserve specific narratives within the public space,” said Obradović.

In both countries, Commissions for Monuments and for Naming of Squares and Streets were put in place just during or after the end of the conflict. “In Sarajevo, the Committee was not part of the governing body, but they were separate entities of selected people deemed as appropriate to pick out the new names,” said Odobašić Novo. Looking at academic literature, the ruling of public space uses to follow specific procedures, where the change is expressed and proposed by the city council position: “I think this was a very particular emergency situation in the early 90s,” said Odobašić Novo.

Renaming of streets, public spaces became a reflection of the new ideologies within a physical space: “In Belgrade, the commission was satisfying the request from the elite in order to tangibly represent the new identities on the territory and place figures and historical events that reflect their point of view to legitimize their political opinion,” said Obradović. Taking distance from the socialist ideology and to show a power shift from communism was a priority: “In Sarajevo, there was a need to legitimize the autonomy of the newly formed country. It was very clear that the direction was anticommunist, anything that would associate to socialism and the Yugoslavian past, needed to disappear.” continued Odobašić Novo.

Spending time on municipal archives both researchers had looked into and compiled lists of toponyms changes. Their study found that, between 1990 and the present days of 2020, 52 streets names and public spaces changed in Belgrade, while 116 in Sarajevo.

The result after 30 years within the two cities is an almost complete de-commemoration of the former Yugoslavia and anything relating to such unity among the six republics to develop instead country-tailored narratives. Considered to be a necessary step, erasing and losing the common history was the price elites were happily paying in order to create a new identity, setting the end of the Yugoslavian multiculturalist project.

In Sarajevo, most changes of the street names were made during the siege as the new independent Bosnia and Herzegovina was being formed: “I was surprised by the number of streets, that were renamed within a relatively small area in Sarajevo,” said Odobašić Novo looking at her home city. The fact that the core of the city, its centre, was getting a name make-over, was a symbolic act of reclaiming political sovereignty, reinforcing national identity. This did not happen by building it from scratch but starting back from what the Committee – comprising intellectuals, artists and residents – considered the latest Bosnian golden age and moment to autonomy such as the Medieval Bosnian Kingdom as well as the Ottoman period.

Aside from erasing the references to socialism, the Serbian capital has started a process of cleansing from any multiethnic and multicultural references to neighbouring countries. Belgrade, once the capital of the the Socialist Federal Republic of Yugoslavia lost his multiculturalism on its streets: “It was a sort of “Make Belgrade Serbian again” process, because this was actually what was happening and what has happened in the last 30 years,” said Obradović.

Differently from Sarajevo, the renaming of streets wasn’t concentrated in a short period of time. Various waves of revisionism changed the old spirit of the city: “It is astonishing that the renaming is happening even today. This means that it’s not a finished process” said Obradović.

A RESEARCH JUST AT ITS BEGINNING

To show the shift, the two researchers have developed a digital platform hosted by Philopolitcs, with interactive maps where it is possible to gather information on what has changed throughout time. The research is also going to be published by the International Burch University, while it can be already found in an ebook format.
Colour-coded and categorized, the toponyms reveals that the major shift happened by cancelling shared historical events, values and socialist ideology.

In the case of Sarajevo, cultural and scientific personalities and historical determinants were considered vital for the construction of the Bosnian ethnic identity, replacing over 40 typonyms referring to the SFRJ. Karl Marx and Friedrich Engels were some of the figures that were cancelled from the public space, wherein Belgrade new name tags were now welcoming kings and monasteries. “Brotherhood and Unity”, the official Yugoslavian motto, lost its place in the public space, too.

The research extended only to the two capital cities: “Something which we would like to do in the future is extending this project to other four capital cities of former SFRJ Republics countries from ex-Yugoslavia,” said Obradović which lives in one of the many streets that have been receiving a new nomenclature.

The research aimed to reach historians, architects, urban practitioners and students, but as well a vast number of citizens of both cities: “It is also very useful also for civil activists: the information we collected can be used as arguments and as a tool to preserve multiculturalism in our cities,” he continued.

SUCCESSFUL REVISIONISM IN THE MAKING

Can you really forget the name of your street, if not history?
There is a peculiarity and main divergence between the two cities when it comes to street signs. in Belgrade, not all, but many signs list the various name changes throughout time: “I think that the main purpose of this was to deliberately show how dramatic our history and our past were, so as to create a sense of closure. That now, finally, we came to a conclusion, we put the past in a frame, we put a plate, and from now this other name will be the one of that street, forever,” said Obradović.

In Sarajevo instead, the tags show only the current names: “A lot of people use the old names still, or anyway they remain interchangeable with the new ones” said Odobašić Novo. Older generations are the ones that tend to recall and call those streets with their old names, despite they not appearing in the public space.

This distinction shows how revisionism can actually work both ways: by erasing the presence of the other, or by presenting it, but rather negate it and call it off. Although cancelled, people in both cities still use older names, but it will be just a matter of time, said Odobašić Novo: “As long as people who remember are alive, our common history is going to be alive, but with the new generations this won’t be possible. It’s a very successful revisionism story, right?”.